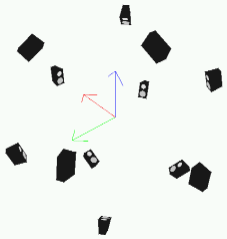 In order to deliver the auralizations in an accessible format for the web, the Ambisonics auralizations were transcoded from their 2nd-order Ambisonics component representation into the binaural format.  Listeners on the web can then access spatial auralizations using only a set of high-quality headphones and a common computer sound card.

A measured HRTF library of a KEMAR binaural head (from MIT) was used for the encoding process.  The Linux-based BruteFIR convolver was used to create the filter structure and perform the encoding as a batch process.  In order to reduce download times for dial-up users, MP3 versions of the auralizations were created using the LAME MP3 encoder.