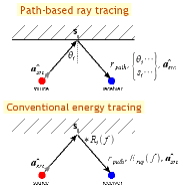 In response to the challenge of modeling the complex ceiling canopy, a new high-resolution ray tracing engine was developed.  This new set of algorithms contains methodologies for simulating the early impulse response of the hall with great accuracy.  The new engine includes support for fundamental acoustical phenomena frequently neglected in conventional techniques, such as support for multi-order sound transmission, angular dependence in reflection and transmission, and arbitrary frequency resolution for materials-modeling filters.

The architecture chosen for the ray tracing engine is a path-based technique, where the ray tracing (as a geometrical operation) is separated from the synthesis technique (an acoustical operation).  In conventional techniques, the acoustical energy of each ray is tracked it travels through space, and this energy is modified as it strikes boundary surfaces.  With a path-based tracing, the acoustical energy is not tracked during the tracing operation, instead, the geometrical path of the ray is saved into a database, including a list of surfaces that the ray encountered as well as the angles-of-incidence of each hit.  This provides many benefits, the primary one being that the model does not have to be re-traced when changing material properties. 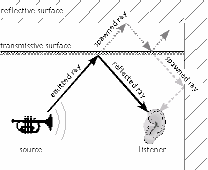 Due to the acoustically-transmissive nature of the overhead canopy in EMPAC, an accurate model of sound transmission through the canopy is required.  Most commercially-available simulation techniques are unable to accurately simulate multi-order sound transmission paths, due to their use of stochastic energy-based techniques for multiple-order transmissions.  This research work applies the concept of ray spawning to deterministically locate transmitted-sound paths.  When a ray encounters a transmissive surface, a child ray is spawned at the surface that continues to search for valid paths beginning on the opposite side of the surface.  This guarantees that transmitted and transmitted-reflected sound paths will be located up to a predefined search order.  Using ray-spawning techniques is highly memory-intensive, and geometrical constraints must be employed on transmission and reflection order so that the spawning operation does not overrun available memory.


In addition to the new ray-tracing and transmission techniques outlined above, the new simulation engine contains the ability to perform high-resolution impulse response synthesis.  Typically, the synthesis of impulse responses from ray-tracing routines is at a fixed frequency resolution (typically octave-band) and with no angular dependence.  The new technique utilizes the surface and incidence-angle data from the path-based ray tracer to allow for the use of material modeling filters of:

This provides unprecedented capabilities when synthesizing impulse responses, allowing for much higher accuracies to be achieved in the modeling of surface material properties.  The ability to use arbitrary frequency resolution allows for details in transmission and reflection spectra to be revealed, and angular-dependent filters increase both the accuracy of simulation and the plausibility of auralizations. 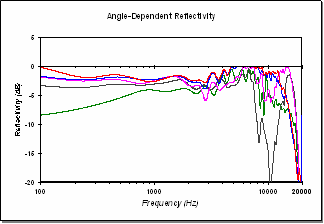